We began working with Lindsay and her Mom, Amy,  in the late summer of 2018 in preparation for the late summer 2019 wedding.   Many conversations, and emails later, some tweaking to the plan…..and a little magic & fairy dust…..and we had a wedding!

There were actually two wedding ceremonies that took place.  First, Lindsay & Alex were married in the north hills of Pittsburgh, in a traditional Russian Orthodox ceremony.  Then,   after a few photographs, the journey to Greentree, and the second wedding of the day!

Lindsay and Alex were then  united during a Presbyterian  wedding ceremony at Unity Presbyterian Church,  right down the street from us here in Greentree!  We furnished two altarpieces, garland for the candelabras, and vases of white hydrangea, pink roses, and pink larkspur for the ceremony.  (Presbyterian churches are generally a little “understated”, so the additional flowers and candles helped to set a festive mood). 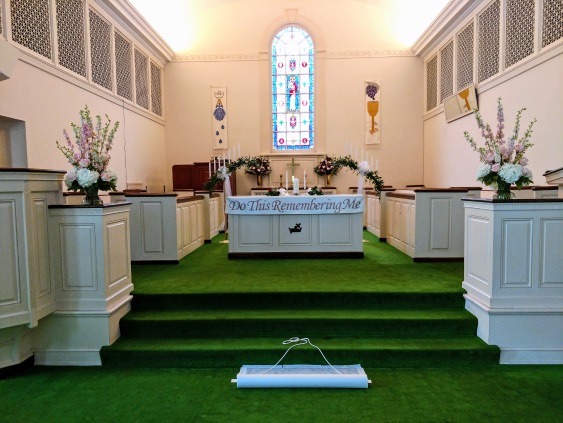 Lindsay’s bridal bouquet (#1033) was a traditional round bouquet with Sahara and Vendella roses, Gardenias, Stephanotis with pearls, and  a little blue thistle.  (the secret ingredient here). 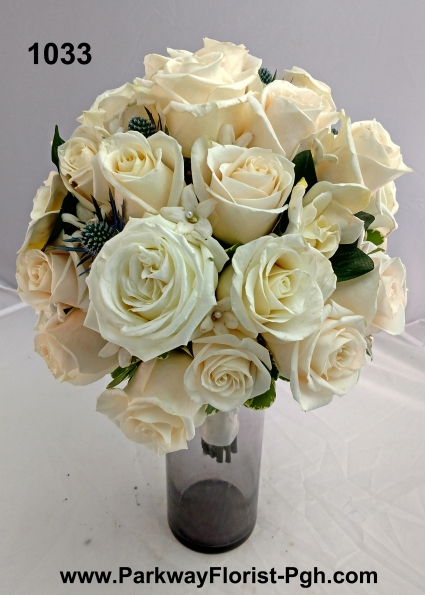 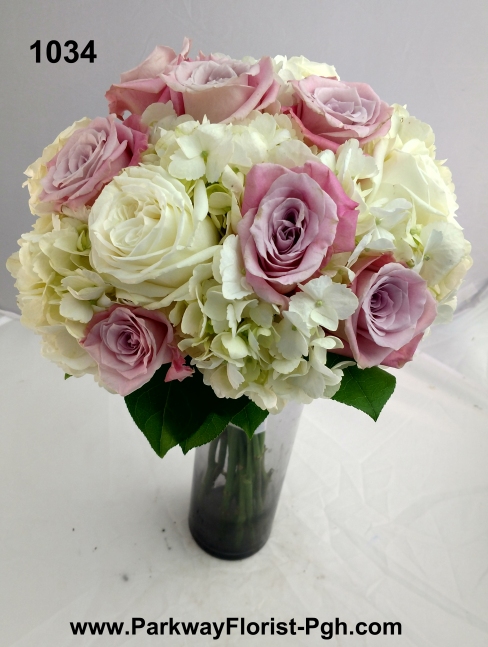 The reception took place in downtown Pittsburgh at The Westin Pittsburgh.  Guests were greeted  at the top of the escalator by an elevated  arrangement on  the place card table (#121), lush with white hydrangea, white roses, pink larkspur, silver dollar and seeded eucalyptus. 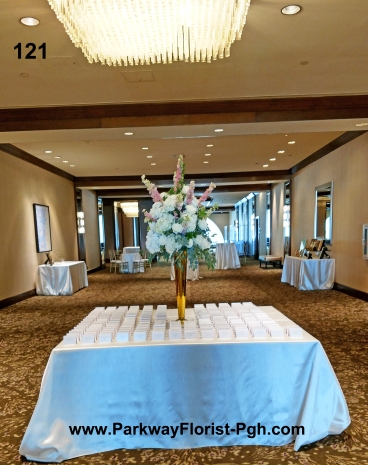 Inside the ballroom, the centerpieces were entirely romantic.  We designed long and low centerpieces (#640) of white hydrangea, white roses, and white spray roses in gold containers, and surrounded them with votive candles and  cylinders of floating candles. 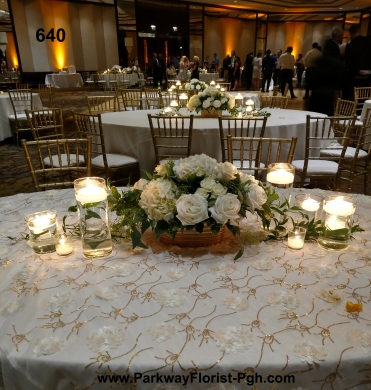 Bethel Bakery supplied a yummy looking cake, which we  also decorated with fresh flowers (#162).    The ombre gold cake was stunning  with our white roses and light pink spray roses.

It was a pleasure working with you, Lindsay and Alex, as well as your family, Lindsay,  to achieve your Best Day Ever!   We wish you both  many years of happiness as you embark on this new adventure together.  God Bless and have a great journey!

Nestled away in Scott Township is a hidden gem of a church called Old St. Luke’s Church.    If you were not looking for it, you would not know that this is a beautiful, restored church, that is still periodically used today.

Travel in time with me to a long ago era…….Close your eyes & just imagine………

Old St Luke’s was a Frontier Church, dating from prior to the Revolutionary War days.  According to literature available, Old St. Luke’s was one of the oldest frontier churches of any denomination west of the Allegheny Mountains.  Colonial militiamen who accompanied General John Forbes on his mission to capture Ft. Duquesne in 1758 returned later to settle & become landowners along the Chartiers Creek Valley.  Many of the streets in this section of Scott Twp. are named after the men who were part of General Forbes’ military mission, and are also buried in the graveyard surrounding the church today.

Major William Lea was a member of the Forbes expedition & received a King’s Grant of 335 acres of land in 1770 from King George of England.  He set aside 10 rods square for the Church & Burial Ground.  Title to the land was duly recorded in West Augusta County, Virginia.  (Pennsylvania did not exist yet.  We were still considered to be part of Virginia).

Major Lea married the love of his life, Dorothy Nelson, in Philadelphia, Pennsylvania.   They returned to the Chartiers Valley area to build their house, and the log church that superseded Old St. Luke’s Church.  Their daughter, Jane, was born & baptized in Old St. Luke’s Church in December, 1774.  She was the first settler’s child born in Chartiers Valley, west of the Allegheny Mountains.  (Jane died in 1859, at age 85, and is buried in the cemetery that surrounds the church).

About 1790, the log stockade church was replaced by a frame building.  And in 1852, the present stone church was erected.  During the Whiskey Rebellion,  when England imposed unreasonable excise taxes on locally produced products, the church became a gathering point for many — while many were driven away from the church.   (The Whiskey Rebellion was one of the many skirmishes  leading up to the Revolutionary War).

The pipe organ, still played today, was purchased in England by Trinity Episcopal Church of Pittsburgh, and was brought over the mountains by mule.  This organ was given to Old St Luke’s Church in 1852, when Trinity acquired a new organ.  This organ is the oldest pipe organ west of the Allegheny mountains, and is still played today for all weddings and ceremonies held in the church.

By many accounts, the cemetery surrounding the church contains the graves of over 200 or more individuals.  Some of the graves are marked.  Some are not.   Some headstones have disappeared over the years due to weather, time and in some cases vandalism.  Archaeological work by Dr. Ron Carlyle in 1991 and later work by a CMU computer group have identified where a number of graves are potentially located.

Old St Luke’s Church & Burial grounds & Garden is now a non-profit corporation, and is maintained by volunteers, and thru donations.   It does not hold regular church services, or have a regular congregation.   It is available for wedding ceremonies for a fee of $500. + separate fees for the organist and clergy.  (For wedding information — please call 724-745-8278).

More information about Old St. Luke’s Church can be found at: www.oldsaintlukes.org. This gem is close by the city, yet hidden from most views.  We invite you to take a ride on a Sunday, and enjoy  a journey back in time!

On Saturday, 7/27/2019, Chelsea and J.R. said ‘I do!’ It was a beautiful sunny evening, perfect for a wedding ceremony in the Pittsburgh Airport Marriott’s Courtyard Garden. 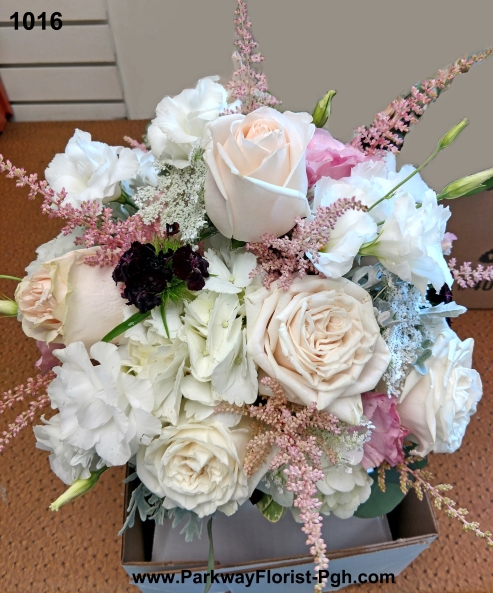 We sprinkled rose petals down the aisle and lined the aisle with white lanterns topped with artificial pink hydrangea. 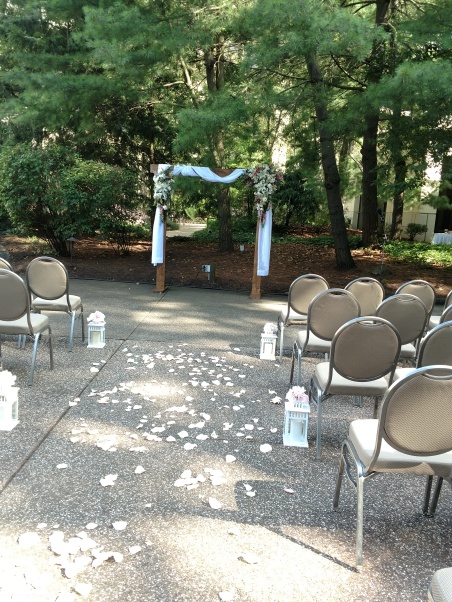 It was a pleasure working with Chelsea and J.R., thank you both for allowing us to play a part in your special day!  We absolutely love this photo of the newlyweds with Chelsea’s parents in front of the arch – it came out lovely.  We wish the happy couple much love and happiness!

Brittany and Corey said “I do” on June 22nd, 2019!  They said their vows in the picturesque Courtyard Garden of the Pittsburgh Airport Marriott. Their photographer was Chase Images, and they took this gorgeous photo of the newlyweds in the courtyard! 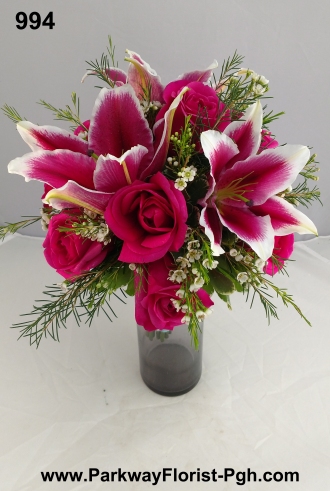 The ceremony took place between two bright altarpieces on top of our pillars, featuring white hydrangea, white stock flowers, pink Gerber daisies, stargazer lilies, pink snapdragon, and pink larkspur.  You can see them pictured below, with the bride! 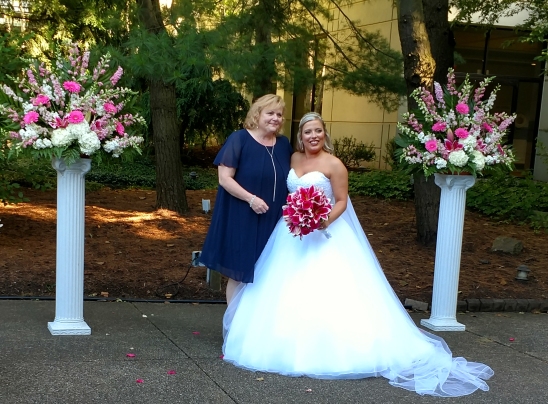 The reception took place inside the Pittsburgh Airport Marriott in their Grand Ballroom.  On the placecard table, we provided a vase (#117) of white hydrangea, Stargazer lilies, pink larkspur, light pink roses, and gunny eucalyptus. 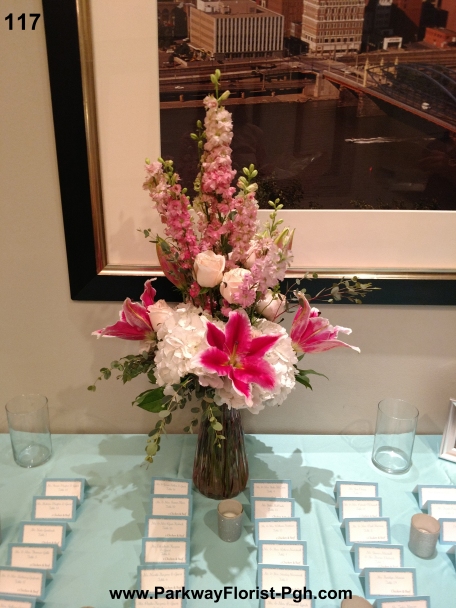 Inside the ballroom, the tables were decorated with alternating low and high centerpieces.  Both the low (#628a) and high (#628b) centerpieces featured white hydrangea and pale pink roses. 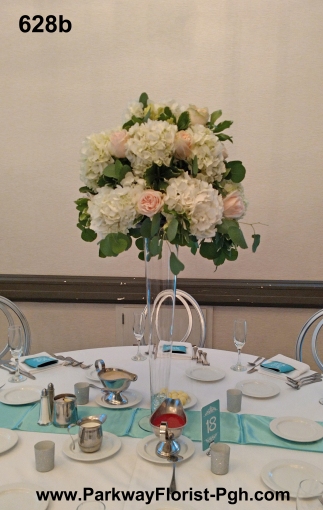 We decorated their wedding cake (#159) from Bethel Bakery with light pink roses and spray roses.  The cake topper was just too cute!

We had a wonderful time working with Brittany and Corey to help them prepare for their big day!  Thank you to the happy couple for allowing us to play a part in your special day!!!

Our adventures over the weekend took us to Saint Peters Church in Steubenville, Ohio for Carmela and Primo’s wedding.  This stunning church was a wonderful venue for our lovely couple.  The pews (#24) were decorated with tulle and gerber daisies, giving an extra pop of color.

The bride carried a full bouquet of champagne and white roses and Queen Anne’s lace (#987). 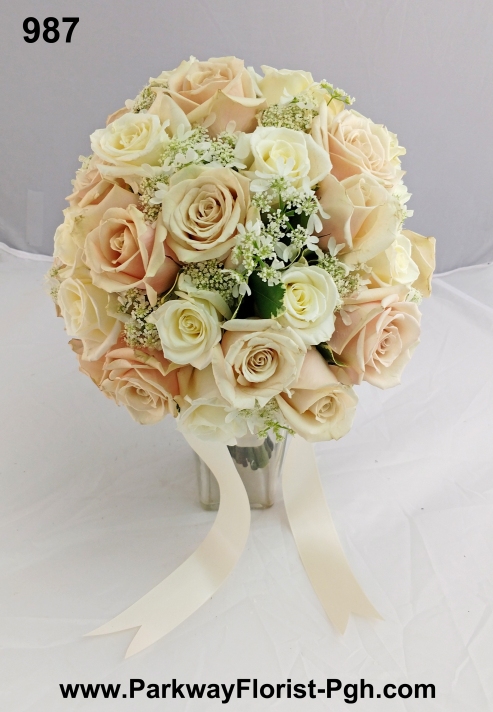 Their reception took place at the Pittsburgh Airport Marriott here in Pennsylvania.  Guests were greeted by a vase of coral flowers on the placecard table (#115). 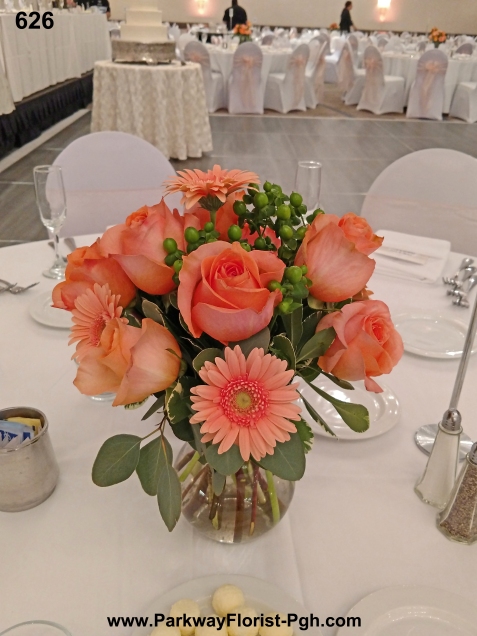 It was a pleasure working with Carmella and Primo on their big day!  We wish them luck and love in this new adventure!

The weather shined for us!

On June 8th, 2019, it turned out to be another beautiful day in our Pittsburgh neighborhoods.  Our visit to Epiphany Catholic Church on Washington Place showcased just how many hidden gems our city contains.  This beautiful church was actually built in 1902! 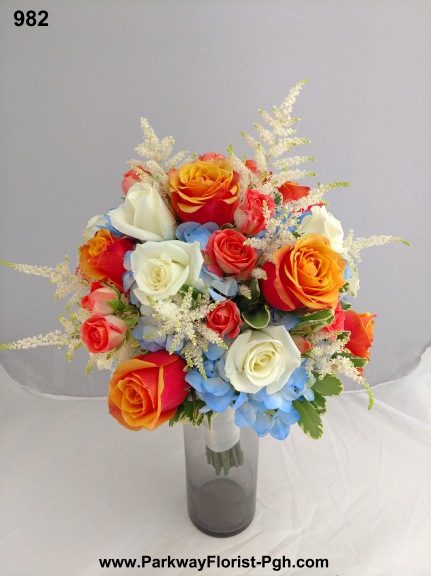 Their reception took place under the stars in the Rose Garden at the National Aviary.  Help from Nicole Brough (Your Big Day Wedding Planner) was greatly appreciated, as there were lots and lots of pieces and parts to get into place for the reception.  The centerpieces were wreaths of blue hydrangea and coral spray roses surrounding gorgeous golden vases holding flickering candles.

We are sure that the guests enjoyed the stroll through the Aviary as well as the wonderful setting for socializing.

Thanks to the newlyweds for allowing us to assist you and congratulations again!!!

What a beautiful day for a wedding!

Sara & Anthony must have prayed really really hard for a beautiful day, because June 1st turned out to have the best weather so far this year in Pittsburgh!  Beautiful plexiglas signs welcomed and directed guests to the Pittsburgh Airport Marriott courtyard for a short, non-denominational service, conducted by Ronald Cambest. 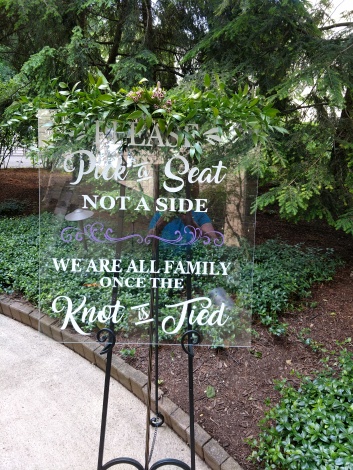 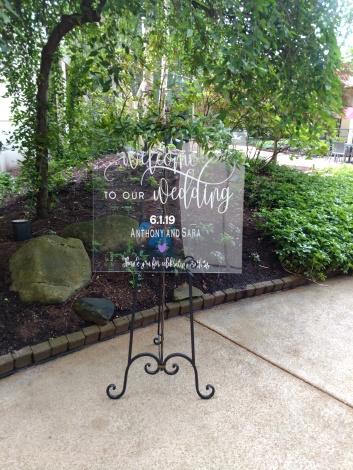 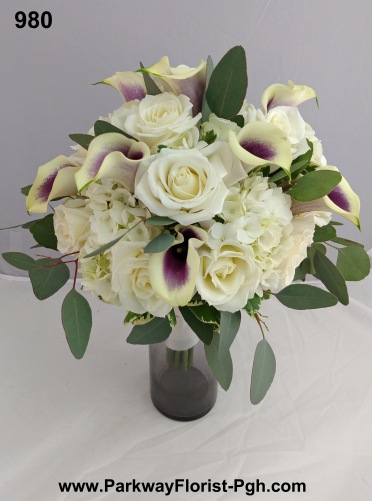 Our pipe and drape, adorned with beautiful purple and lavender flowers,  provided an elegant backdrop for the ceremony and for pictures after the service.  Following the service & pictures, we moved the pieces from the pipe & drape  into the ballroom to adorn the head table. 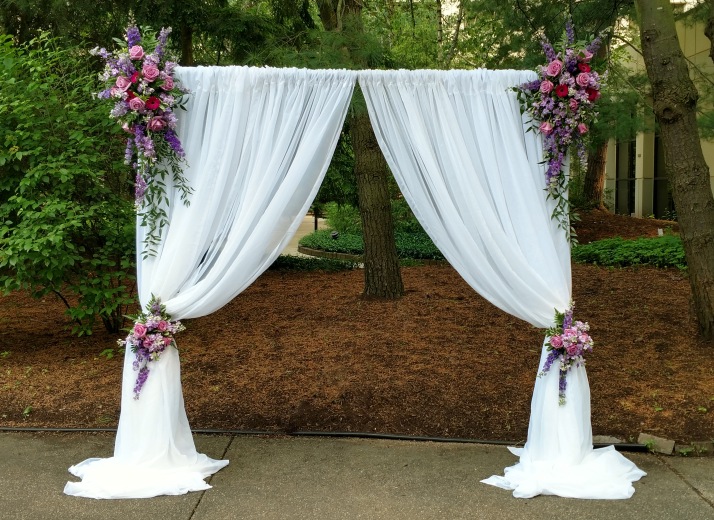 Inside the ballroom, the cake was trimmed with lavender roses and spray roses. 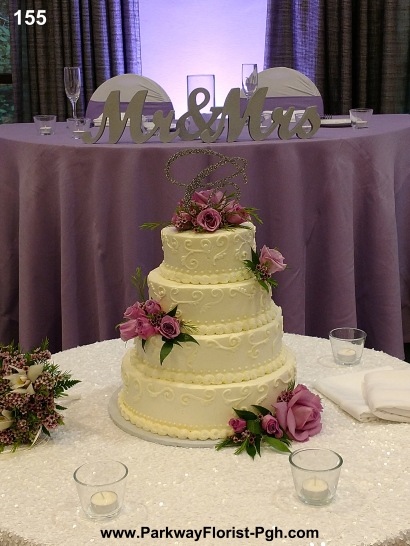 The centerpieces were low on the tables and combined as many purple flowers in a variety of shades as we could find! 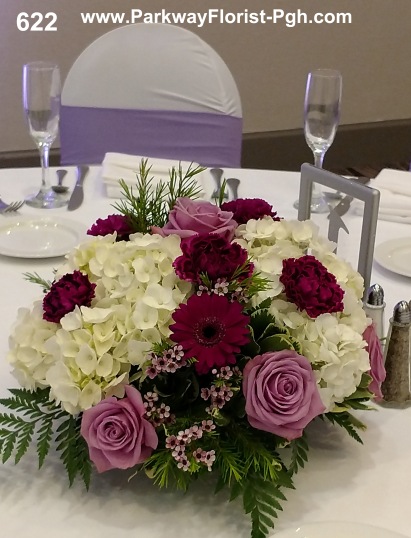 Congratulations to Sara & Tony!  Thank you for allowing us to be a part of your special day. 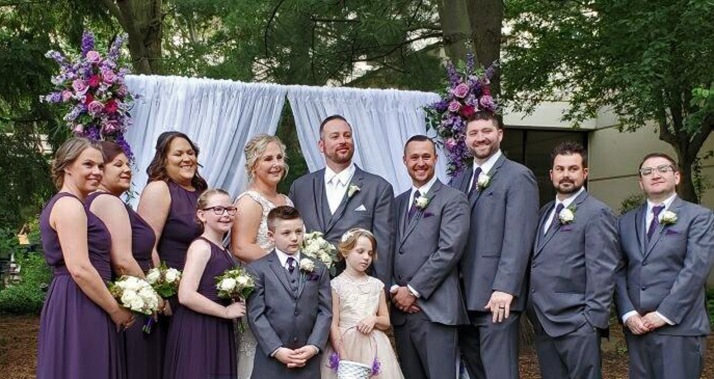