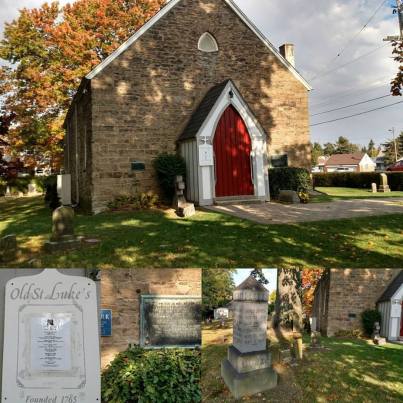 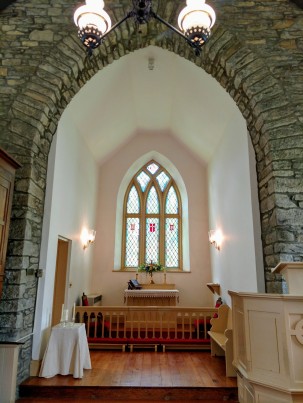 Nestled away in Scott Township is a hidden gem of a church called Old St. Luke’s Church.    If you were not looking for it, you would not know that this is a beautiful, restored church, that is still periodically used today.

Travel in time with me to a long ago era…….Close your eyes & just imagine………

Old St Luke’s was a Frontier Church, dating from prior to the Revolutionary War days.  According to literature available, Old St. Luke’s was one of the oldest frontier churches of any denomination west of the Allegheny Mountains.  Colonial militiamen who accompanied General John Forbes on his mission to capture Ft. Duquesne in 1758 returned later to settle & become landowners along the Chartiers Creek Valley.  Many of the streets in this section of Scott Twp. are named after the men who were part of General Forbes’ military mission, and are also buried in the graveyard surrounding the church today.

Major William Lea was a member of the Forbes expedition & received a King’s Grant of 335 acres of land in 1770 from King George of England.  He set aside 10 rods square for the Church & Burial Ground.  Title to the land was duly recorded in West Augusta County, Virginia.  (Pennsylvania did not exist yet.  We were still considered to be part of Virginia).

Major Lea married the love of his life, Dorothy Nelson, in Philadelphia, Pennsylvania.   They returned to the Chartiers Valley area to build their house, and the log church that superseded Old St. Luke’s Church.  Their daughter, Jane, was born & baptized in Old St. Luke’s Church in December, 1774.  She was the first settler’s child born in Chartiers Valley, west of the Allegheny Mountains.  (Jane died in 1859, at age 85, and is buried in the cemetery that surrounds the church).

About 1790, the log stockade church was replaced by a frame building.  And in 1852, the present stone church was erected.  During the Whiskey Rebellion,  when England imposed unreasonable excise taxes on locally produced products, the church became a gathering point for many — while many were driven away from the church.   (The Whiskey Rebellion was one of the many skirmishes  leading up to the Revolutionary War).

The pipe organ, still played today, was purchased in England by Trinity Episcopal Church of Pittsburgh, and was brought over the mountains by mule.  This organ was given to Old St Luke’s Church in 1852, when Trinity acquired a new organ.  This organ is the oldest pipe organ west of the Allegheny mountains, and is still played today for all weddings and ceremonies held in the church.

By many accounts, the cemetery surrounding the church contains the graves of over 200 or more individuals.  Some of the graves are marked.  Some are not.   Some headstones have disappeared over the years due to weather, time and in some cases vandalism.  Archaeological work by Dr. Ron Carlyle in 1991 and later work by a CMU computer group have identified where a number of graves are potentially located.

Old St Luke’s Church & Burial grounds & Garden is now a non-profit corporation, and is maintained by volunteers, and thru donations.   It does not hold regular church services, or have a regular congregation.   It is available for wedding ceremonies for a fee of $500. + separate fees for the organist and clergy.  (For wedding information — please call 724-745-8278).

More information about Old St. Luke’s Church can be found at: www.oldsaintlukes.org. This gem is close by the city, yet hidden from most views.  We invite you to take a ride on a Sunday, and enjoy  a journey back in time!