During the month of May, we do not just celebrate and recognize our mothers,  we also celebrate and remember those of whom surrendered their lives in honor of our nation’s service. This particular day of remembrance and honoring our nation’s heroes is May 30, otherwise known as Memorial Day.

“Decoration Day,” which was its original name,  made its first appearance three years after the Civil War on May 5, 1868. The Grand Army of the Republic declared May 30th as the day in which people were to decorate the graves [with flowers] of the soldiers who had served and were buried in the Arlington National Cemetery. It is believed that this date was chosen so that all of the flowers placed on the graves would be in bloom all over the nation.

The flower that has been designated the Memorial Day flower is the poppy (more so the red poppy). The reason for this designation stemmed from the poem In Flanders Fields by John McCrae. The poem reads, 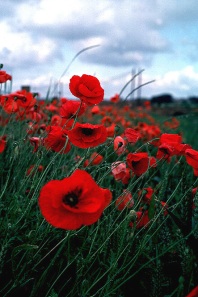 In Flanders fields the poppies blow
Between the crosses, row on row,
That mark our place; and in the sky
The larks, still bravely singing, fly.
Scarce heard amid the guns below.

We are the dead. Short days ago
We lived, felt dawn, saw sunset glow,
Loved, and were loved, and now we lie
In Flanders fields.

Take up our quarrel with the foe:
To you from failing hands we throw
The torch; be yours to hold it high.
If ye break faith with us who die
We shall not sleep, though poppies grow
In Flanders fields.

The representation of the poppy flower in the poem is to mean the fields of graves and the bloodshed that the soldiers went through. Also, in many countries, the poppy is known as the “flower of remembrance,” which led to its declaration as the official Memorial Day flower.

As Memorial Day approaches us, take some time to remember and celebrate those who have made this very holiday an existence. If you have  family, friends, or know of a soldier who has passed in the name of war, make a visit to their burial site with some poppies or even a flag to show that they are still being remembered and honored for their heroic efforts in war for our nation!

– For more information about Memorial Day or the poppy flower’s signification, visit www.usmemorialday.org/ or www.classbrain.com/. –

2 thoughts on “The Importance of Memorial Day”